The Alpinist – The Summit of Seiko Branding

This is an update and resurrection of an article published on the GMT+9 blog, the best Seiko blog on the net, sadly killed by hackers. 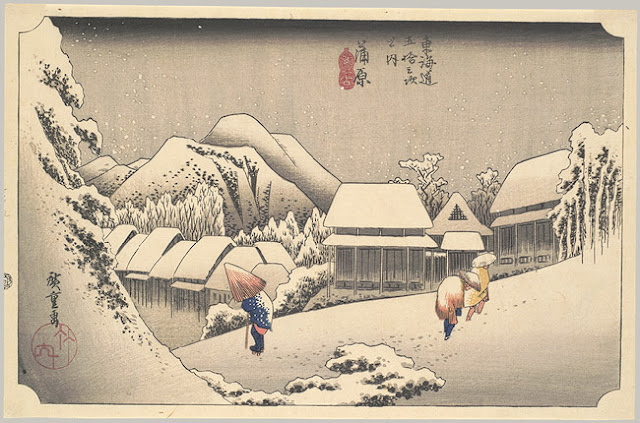 Evening snow at Kanbara by Hiroshige – Picture Credit: www.metmuseum.org
The Alpinist name is, at least for collectors outside of Japan, one of the most recognizable Seiko brands.  As you know, Japan is a land full of mountains.  The outdoorsman culture is heavily ingrained in the Japanese mind.  In his classic article on the Seiko Alpinist — here reprinted with permission at Yeomans site  — Seiya Kobayashi linked these thoughts together into the yama-otoko or mountain man.  This man and his need for a rugged watch was supposedly the inspiration for the creation of the Seiko Alpinist series.  In his article, Seiya paints the picture of an intrepid mountain walker with his trusted Seiko watch and his lunch box.  However, there is also another side to this story. 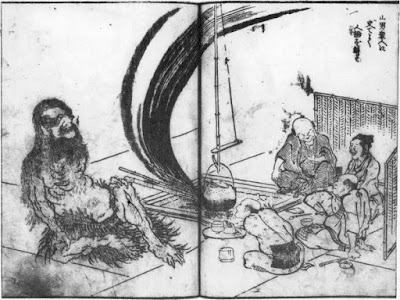 Picture Credit: http://commons.wikimedia.org/wiki/Category:Katsushika_Hokusai?uselang=pt
This is another yama-otoko or Giant Mountain Man pictured above from a 19th century Hokusai sketch.  In this depiction we see a more brooding, spooky figure dominating his surroundings and keeping the villagers in check.  Could this yama-otoko have been the inspiration for the first Alpinist?  To me, the answer is yes as I see the Laurel Alpinist conveying a darker side of things in contrast to the modern mountain boy scout image Seiya portrayed. 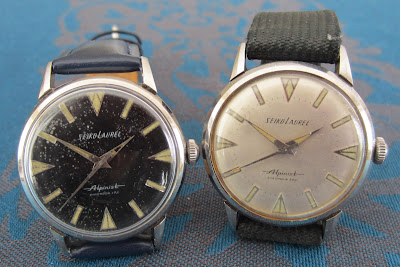 Getting back to the main theme of this article and the history of the Seiko Alpinist brand, let’s look at the first watch to be marked with the Alpinist logo.  Introduced in 1961 with a price of JPY 4,500 (compared to a standard Laurel at JPY 3,900) it was available with black or white dials.  Mechanically, this is a fairly low end 17j handwind and is essentially a normal Laurel sold with a special Alpinist bund strap and logos. 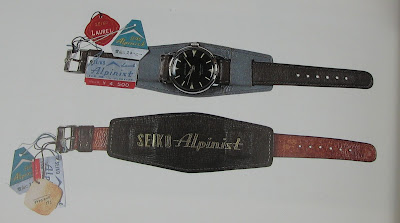 Picture Credit: Seiko Museum Book series
The first Alpinist versions had plain Laurel caseback engravings but did use a waterproof screwback case which was also available in some of the sportier Marvels. 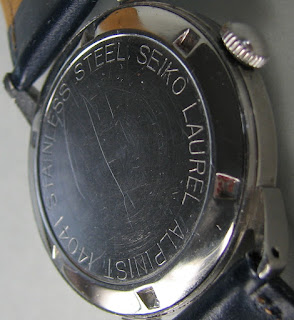 The next Alpinist was produced under the Champion series.  Its 1963 release leads us to believe that this watch was an invention of the Daini marketing department to gain  traction for the Champion line of watches.  The chronology of the different variants is a bit uncertain here, but I think this pictured version was the first. 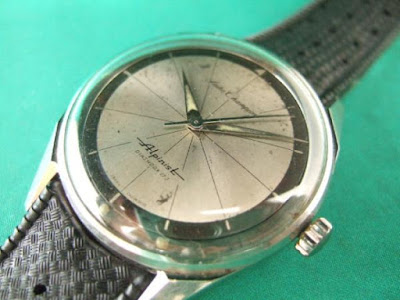 Picture Credit: Yahoo Japan
This first version came with a plain caseback and was somewhat quaintly labelled as “rainproof”; certainly adequate for any mountain climber. 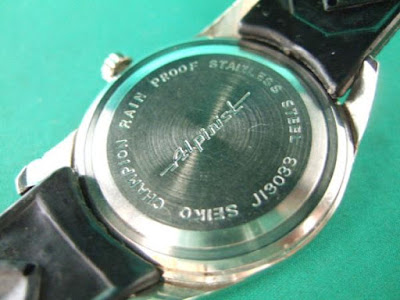 The next version of the Champion 850 added a more elaborate dial with 24h markings.  It was available both in goldplate and SS versions.  The SS version having both the silver dial pictured below and another with the black and silver colours reversed.  It was originally released with both lumed hands and hour markings but, as with a lot of these lower quality Seikos, the lume tended to go black or dry out and fall off.  Most, if not all Champion Alpinists had these lumed sword style hands. 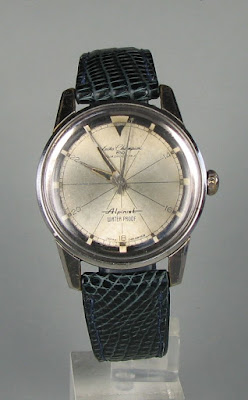 Here is the goldplated version from 1964 showcasing a more traditional dial. This one is also called the 85899 using the earlier Seiko 5-digit system. 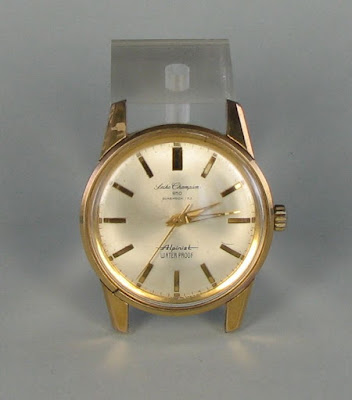 The update of the Champion Alpinist also meant a new caseback.  This is the first appearance of the Alpinist Mountain logo and one of the first Seikos to have an adorned caseback; a tradition later continued with all kinds of waves, fish and sea lions. This caseback uses a stamped print.  As far as I know, this caseback was only available on the SS versions. 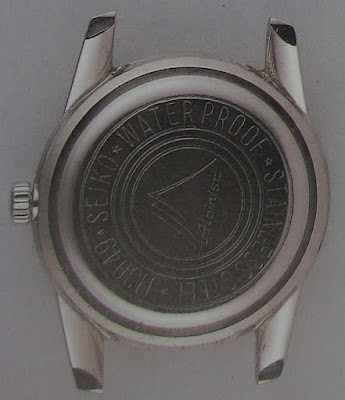 The gold Champion Alpinist, as well as later versions of the SS Alpinist, used an etched caseback, which was cheaper to produce but more sensitive to wear. 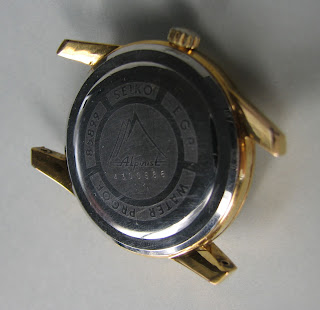 The Champion Alpinist was sold for a few years up until the mid 60s.  After that, we wait until 1995 for the next appearance of the Alpinist brand in a Seiko lineup.  The new watch, introduced as part of the Prospex line, used the excellent 4S15 28,800 bph automatic caliber.  This Prospex Alpinist also introduced us to the inner bezel compass and the 4 o’clock crown; features which have been seen on all Alpinists since then.  The 4S15 Alpinist was available with black, cream and green dials.  This watch was produced only for two years and has become one of the more popular modern Seiko’s for collectors. 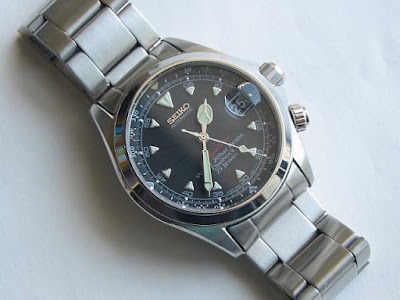 Picture Credit: http://www.antiwatchman.com/watch.php?NUM=J-1971
This Seiko manual shows how to use the compass.

The 4S15 Alpinist was also made in a South East Asian version under the Sports 200 series.  Although there is no Alpinist logo on the dial or caseback, it is otherwise identical.  As with the Japanese release, the Sports 200 was, in addition to the black and cream dials also available in a rare green dialed version which later reappeared in the 6R15 Alpinists.  This watch seems to have been produced until at least 1997 and is usually cheaper then the 4S15 with the Alpinist logos. 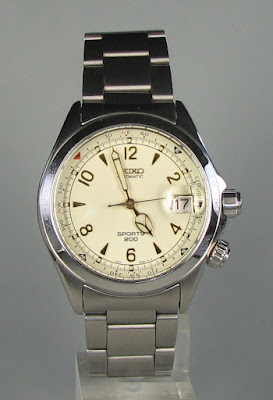 The mountain logo is present on the Alpinist version. 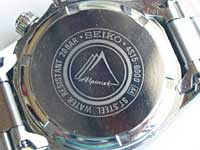 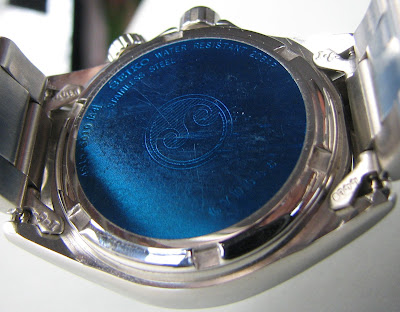 The Alpinist brand followed the times and was next seen in 2003 with the release of a perpetual quartz watch using the 8F56 caliber.  This lineup consisted of two versions of the standard Alpinist cream dials as well as black.  The inner bezel compass was also used. 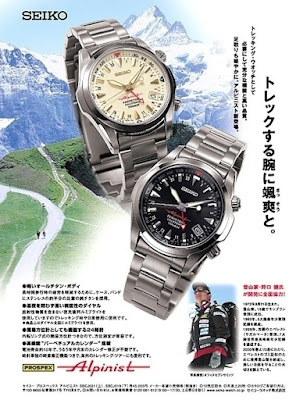 A more interesting version of the 8F56 Alpinist is the SSASS special edition produced in a limited series of 500 to support the Japanese-American mountaineer Ken Noguchi and his Seven Summits Actions for Sustainable Society (or SSASS) project.  SSASS was/is an environmental group led by Ken Noguchi and his team who have climbed the seven highest summits in the world (Kosciusczko version as they climbed Mt Kosciusczko rather than the Carstensz Pyramid).  The aim of SSASS is to create awareness of the mountains of garbage that have accumulated on these mountains.
Ken Noguchi supposedly brought back 8 tons of garbage from one of his Mt Everest expeditions.  The blue green colour of the SSASS dial was chosen because it is the official colour of the SSASS project.  The unique colour is representative of the sky and the seas.  The sponsoring of Noguchi follows the Seiko tradition of supporting adventurers like Naomi Uemura and the Landmaster series of watches. 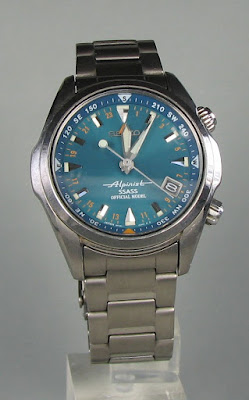 The 8F56 uses the traditional mountain logo on the caseback. The only difference between the SSASS and the normal version is the limited edition numbering. 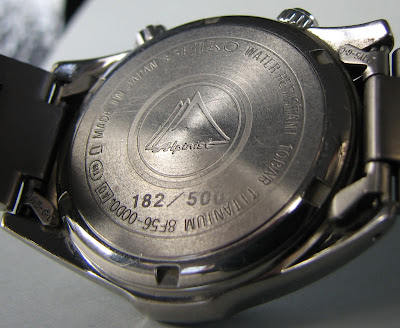 The next edition in the Alpinist series appeared in 2006 with the introduction of the 6R15 models.  The then current models consist of the SARB013, SARB015 and SARB017 with the SARB017 still in the lineup as one of the longest serving Seiko models.  While still keeping the tradition black and cream dials, we also get the green dialed version.  The compass dial and Mercedes hands are still present on the cream and green models, but the black dialed version uses a more modern hand design.  This watch is still in production and available at prices of about JPY 35-40,000. 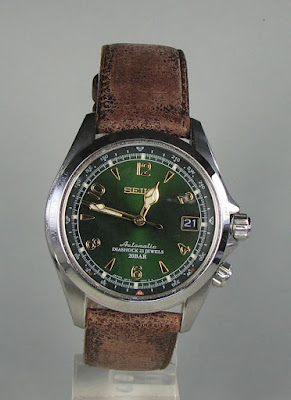 The caseback design is familiar from the previous editions. 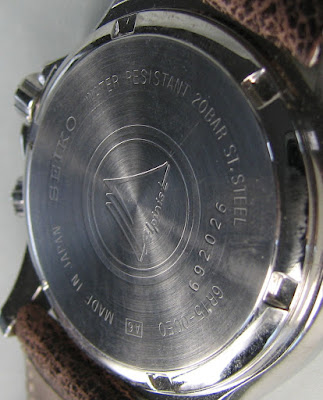 The latest, but hopefully not the last Alpinists were introduced in 2009 with the SARB059 and the SARB061. A bit bigger than previous versions they are still using the Seiko mid-range 6R15 caliber and have a mix of traditional Alpinist attributes with the compass bezel and the emergency signals on the dial.

No Alpinist markings on the dial but with the now standard stylised mountain on the caseback. 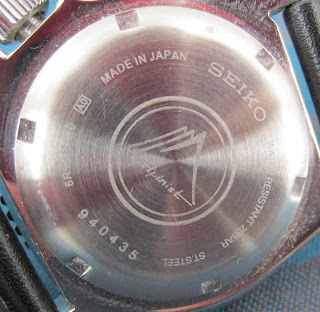 Finally, a group shot of all of my Alpinists.